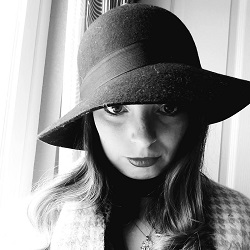 Ariana Grande’s real hair is curly, brown and not as long as her famous ponytail.

She has for years battled with the media about never changing her original hair — turns out that she wore the signature ponytail for a very specific reason. The constant years of dying her hair for her role as Cat in the Nickelodeon series Sam & Cat had caused some major damage that the star was embarrassed of. She has since then been letting her hair down, quite literally. We have to give her credit because we all wish we could have Ariana Grande hair at the end of the day. Let’s take a look at some of her best hairstyles over the years.

It doesn’t get much more real than this photo at Planet Hollywood Times Square in New York for Ariana Grande with curly hair — pre-ponytail and hair damage she used to rock wavy hair that seemed to go on endlessly for days. This is no doubt her real hair, and it’s absolutely gorgeous!

It’s a ponytail, but it’s red and it’s pulled to the side so it’s a little different. This was during her time as Cat for the Nickelodeon series of Sam & Cat. Ariana attends the 2010 Tribeca Film Festival opening night premiere of ‘Shrek Forever After’ at the Ziegfeld Theatre. This would be a pre-cursor to her signature style, but she wasn’t quite there yet.

This pretty enchanting dark color looked fantastic on Ariana Grande — there must have been something truly magical about the Jingle Ball because it just so happens this new hair color was also revealed at the event.

Every once in awhile we caught a glimpse of Ariana Grande letting her hair down at the one another KISS FM’s Jingle Ball. We especially loved the caramel-colored curls that she wore at the Jingle Ball as she serenaded her fans with sweet melodies — almost as sweet as her pretty hair color.

We can never say no to an adorable headband — it’s an easy way to add style to any look. If you’re getting ready for music festivals and summertime try these enchanting and simple headband styles for yourself. Ariana Grande lookes so inspiring at the 2013 Radio Disney Music Awards!

Half up half down styles are a great alternative for summertime since you get to style half of your hair any way you want, but you won’t have to worry about it getting too hot since half your hair is pulled up. We especially like the darker color paired with Ariana Grande’s half updo at the Elvis Duran Z100 Morning Show. By the way, Ariana has mastered styling fake hair, weaves and super long extensions.

Ariana Grande will from time to time rock straight locks (perfectly smooth and look like a wig) and we completely appreciate it! It gives all the curly-haired girls hope that there is a way to tame their curls into the same fabulous style from time to time. By the way, straight hair 2014 was spotted at the MTV EMA’s 2014 in Glasgow.

If you’re tired of wearing your hair the same way for every show (cough: ponytail overload) try some accessories to spice up your style. There was no better day than the day that Ariana Grande broke out the cat ears at The Morning Mash Up Broadcast at SiriusXM Studios, it was a welcome relief and refreshing to see something different. You can refresh your look with a simple accessory like a bobby pin for example!

If you really want to make an entrance with a half updo add some sideswept bangs to the look. Ariana Grande really makes a statement  at the 2014 American Music Awards since her bangs are darker than the rest of her hair, but sideswept bangs never get old!

There’s nothing that can make you look yourself like correctly parted hair. We think that this side part makes Ariana Grande at Nickelodeon’s 27th Annual Kids’ Choice Awards look more mature. If you’ve been questioning your part check out this helpful video for tips on how to part the right way.

Ariana Grande sported something a little different from the ponytail at a Boots show in London, where she launched her ARI perfume. We’re not sure which is sweeter the smell of her signature perfume or the adorable two messy buns on top of her head.

Ariana Grande’s natural hair color is brunette (gasp!), but we’re we really that shocked by that? She explained that she had to wear extensions for years due to the damage of hair color, but we have to agree that natural or not we think she completely rocked the Music Awards show with her dark curls.

There’s nothing better than running to the basics from time to time — sometimes your hair just needs a break. That’s when you turn to this easy style and check out this top knot style guide and comb your hair back into a cute updo. Ariana looked absolutely stunning at the 2015 American Music Awards!

It’s a ponytail, but it’s done differently so we have to give our favorite IT popstar some credit — she did surprise us at Music Choice with two braids that ran across the top of her head to meet her signature ponytail. This is an easy go-to style for lazy beach days and fun music festivals.

If you’re going to wear your hair the same way every time — take a tip from Ariana Grande and change it up, using her experience at the MTV Video Music Awards at Madison Square Garden. Add some spice by using fun and easy textures like crimps to give your hair added volume. Here is a guide how to crimp hair, check.

Not everyone can pull off fringe bangs, but it doesn’t mean we shouldn’t try! If you’re afraid to permanently add bangs to your everyday style try something more temporary like clip-in bangs for a less dramatic change.

There are plenty of colors to choose from if you want to test out the ombre look. You can go dramatic and bold with bright colors or choose a more natural route like a dark fade into blonde hair like Ariana Grande at The 58th GRAMMY Awards.

If it’s a ponytail — and if we’ve learned anything from Ariana Grande it’s that the ponytail has to be sky high and it has to have some fun details. Her appearence at the 2016 American Music Award wasn’t an exception. If that detail is some pretty braids or curly waves it doesn’t matter — what matters is how high you rock your ponytail!

When all else fails just do whichever style you like best–as Ariana Grande will tell you in her song Focus, “I’m over here doing what I like” and we should take a hint and do the same. If we want rainbow hair and shocking styles for summertime than we should go for it. We love this look from the 2016 Billboard Music Awards!

These cute little hair jewelry pieces are all over Instagram particularly due to Ariana Grande! She rocked hair piercing during her ‘Dangerous Woman’ tour at Madison Square Garden and her signature ponytail never looked so gorgeous! Ariana doesn’t need a new haircut when she uses so much interesting accessories!

How To Get Ariana Grande Hair?

Many girls only dream of having Ariana Grande silky brown hair, but with hot, sweltering summer months ahead we might just be rushing to pull off her signature ponytail style every day. At least we know we’ll look good doing it, especially if we add variety and cute accessories. Watch this cute tutorial and learn how to get ariana grande hair, including secret hair hacks and tricks: