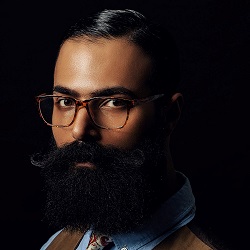 Zuhair Tahan is a Dubai-based celebrity hairstylist with international experience in Syria, Egypt, Malaysia and Singapore. Learned the craft from his grandfather in his early days and studied later at the Vidal Sassoon Academy and participated in hair awards such as one shot and barber of the year GCC where he was one of the five finalists out of 100 participants Then chosen by Wahl Clippers Corporation as an Educator for Middle East and Africa regions.

Two block haircut has recently gone super trendy among Asian men. As fast as this haircut went so massive, people doubted it would last long among hair trends. Soon enough, hair professionals have realized that it’s here to stay, as now not only Asian men are flocking to the shop asking for this look. Today, we see two block hairstyles in fashion shows, on celebrities, in magazine editorials, on covers and on the streets. Here is your ultimate guide to acing the hairstyle.