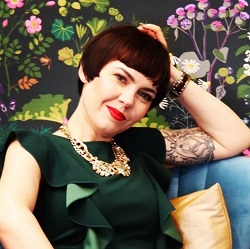 Cole is originally from San Diego Ca. She’s been working behind the chair for over 20 years. Currently, when not in the salon, she works as a freelance educator for The Wella Company. Three years ago, Cole opened Bristol Hairdressing in San Diego, CA. She has a family-owned craft hairdressing salon and works alongside her daughter and protege Sasha. During quarantine, they opened a second location in Reno, NV. When Cole is not hard at work behind the chair, she’s teaching all over the West Coast and manages an Instagram resource group @Support_Your_Local_Hairdresser. Most recently, she’s been blessed to collaborate in live haircutting education events with icons like celebrity hairdresser Nick Arrojo as well as video education with brands like Ibiza Hair Tools.

The Bixie Haircut is a Banging Short Hair Trend of 2022

I first heard about the bixie from a trendy fashion blog. The cut was described as a hybrid between the bob, mullet and pixie, and the idea immediately made sense to me! It wasn’t long until I realized that bixie is not only a hairstylist’s dream, but also a banging trend you’ll see everywhere in 2022, and here is why.