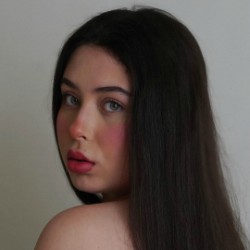 by RosyMelina Updated on February 1, 2021

When people consider Tik Tok, they usually think of dancing. I did a poll on my Instagram account a few months ago. I was so surprised to find out that many people had no idea about the existence of beauty-related content on Tik Tok. So, with that in mind, today we are going to talk about the latest Tik Tok hair trends.

Big content creators such as @EmmaChamberlain, @BryceHall and @LaurenZsideyt have used this trend. It is represented by content creators in different ways. Some of them recommend: “If you’re a brunette, use this filter to look blonde”. Others change their color simultaneously since they have loved the color tint so much.

If you’re hesitating about whether to dye your hair pink and blue and would like to see beforehand how you will look after your hair is dyed, use color tint on Tik Tok or try visual makeover by The Right Hairstyles.

Click on Hazel Tint on the video to see other Tik Tok hair transformations.

This trend started with #curlscheck using Aussie products and there are more than 1.7 billion videos on this topic.

Girls had no idea that their wavy hair was curly. After following some Tik Tok hair tricks, they fully realized it.

The original video of @thedaniellelife showing women how to brush curly hair properly and dry it with a T-shirt instead of a towel was used more than 4,410 times. Thus, thousands of Tik Tokers shared their own jaw-dropping results.

Posts on the topic are diverse. Some of them convince you that you should get curtain bangs. Others show how to style curtain bangs properly. Trend #curtainbangs has gathered more than 198.2 million videos.

The thing I have learned from Tik Tok for sure: to have Matilda Djerf’s hair, it is not necessary to go to a hair salon and get layers done. A little bit of dry shampoo and maybe a curling iron will do the trick.

If you’re familiar with Tik Tok, then you will probably recognize this hair trend.

Fashion blogger and Tik Tok star @Brittany.Xavier transformed her hairstyle adding some contrasting face-framing highlights, which brought her more than a half-million views.

She was wearing such a hairstyle until the trend died down. She said goodbye to her blonde bangs in August and made a new hair transformation video.

This is probably my favorite Tik Tok hair trend, which I’ve yet to try out. Using a long sock to create curly hair seems a little odd until you get amazed by the results. And, then you think you might just do it.

#Curlyhairsock has more than 257.5k views, but I know for sure this trend has gotten more attention than it might have seemed at first sight.

This ##curlyhairsock trend was pretty successful😲 Btw i am turning 20 today, so Happy Birthday to meee🎂

#6: The Fastest Way to Tie Hair Without a Hair Tie

I didn’t think it was possible. I could have saved a lot of hair elastics by doing this. @thatmissychick on TikTok has the right idea regarding what all of us thought when we first saw this video with more than 1.9 million likes.

Users were asking the hack creator, Tik Toker @h_kyung_176, for a slow tutorial and the new video got another 3.6 million likes with more than 4.4 million views.

After a few attempts, this is what I came up with.

I’d like to admit I love this trend. But I would be so scared to do this on me. They call it Devil’s horns. Creators cut inches off their hair to make horns. Cool but daring and kinda crazy!

Have you ever tried collecting the hair that falls off after a shower? This Tik Tok hair trend with @Karli_Killa got more than 5.9 million likes for 192 days of collecting her hair.

After this video, the hashtag shower hair challenge had more than 372.7 million videos. I think you could make some pretty amazing hair extensions of a soon-to-be wig. So is hair loss considered trendy now?

Where was Tik Tok when I wanted a haircut but couldn’t explain it right to my stylist? This trend suggests Tik Tokers showing their ‘dos at different angles so that all the details can be captured. See how @jetthejem has taken tiny pieces of her hair, put beads on them, and demonstrated the braiding by doing 360° of her hair.

Alexa Demi, from Euphoria, became an idol right after this release. Her makeup and hair became a runaway trend and Tik Tokers were trying to recreate her look. The most popular look is her updo with a tiny curl on the side.

I am waiting for the next Euphoria season and the upcoming trends of Alexa Demie.

As you can see, there are at least 10 wonderful Tik Tok hair trends that have become incredibly viral due to short videos on this popular platform. Some of them are useful, others are quite odd, but all of them can make your hairstyle stylish and definitely creative.

Related Posts
Hair Graffiti Predicted to Be a Hot Trend This Spring
The Bixie Haircut is a Banging Short Hair Trend of 2022
Are '80s Hairstyles Making a Comeback?
20 Middle Part Hairstyles to Wear in 2022
20 Impressive E-Girl Hairstyles to Fall For the Trending Aesthetic
20 Popular '90s Hairstyles That Made an Epic Comeback