Why I Shaved My Head Before an International Beauty Pageant 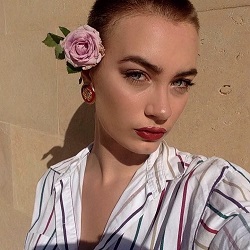 Have you ever had a fiery desire to shave your head? It’s surprisingly still a radical thing to do. Despite shaved head women such as Angelina Jolie, Halsey, and Keke Palmer being among the famous celebrities who have opted for a buzz cut at one point or another, it’s still a bit taboo. However, I am proud to be among the women who have joined the “shaved hair club”!

Why Did I Shave My Head?

My name is Cricket Guest, I am artist, model, actress, filmmaker and writer who is passionate about activism. There were many reasons as to why I decided to shave my head. It was largely based on my issues with a lack of representation, specifically in the beauty pageant world.

I began competing in beauty pageants at 14 years old. I started my journey at a local charity beauty pageant in my hometown in which all the proceeds go to childhood cancer. From there, one thing led to another until just weeks after turning 18 I won the title “Top Model of Canada” which means the opportunity to represent Canada and compete internationally in 2017. Immediately after being crowned, I thanked the judges and coordinators for the opportunity. Before even starting “congratulations” they begin listing off things I need to change about myself – including, but not limited to comments about body weight and hair.

These comments immediately struck a nerve. Fortunately at this point in my pageant journey I had the confidence and awareness to separate that their comments weren’t directed at me as a person, they were directed at me as their new commodity. However, their comments left me thinking of the hundreds of young girls these same people work with, some of the girls being as young as I was when I first started. My journey with pageantry and modelling in itself had been riddled with various unhealthy habits. I became fixated on winning a crown, to my younger self winning the crown would bring me happiness.

Or so I thought.

I Wasn’t Being True to Myself

Soon after entering into these industries I developed an eating disorder, with a desire to change myself to embody what they wanted, looking at the girls who they would crown and becoming that. Desperately hiding the aspects of my life that weren’t pretty enough for a polished beauty queen. I won the crown for that 14 year girl who just wanted to love herself. Multiple crowns. And yet instead of loving myself, I lost myself.

After winning the Canadian title I began to be called a “role model”. And it did not sit well with me, who felt undeserving of the label. I couldn’t stop thinking of the girls who were less secure with themselves being told the same things. I did not want anyone looking up to me and thinking their success should be defined by how closely they fit this archaic mold of what being a “beautiful woman” is and what it’s like to look good. And these beauty standard enforcements go beyond the beauty pageant stage. Why are young black girls getting suspended from school for wearing their protective hairstyles? Why do WOC need to fight so much harder in the workforce, especially if they do not conform to western ideals? Why are women being verbally and physically abused, even murdered for expressing their faith with a hijab? Why should the children struggling with cancer, the reason I entered my first beauty pageant, not be shown that they can be beautiful and feminine in a gown too? We are more than this toxic, eurocentric version of what beautiful is.

And so I needed to reclaim myself. If not for my 14 year self, I needed to use my privilege and platform to direct the attention on issues that truly matter.

I shaved my head 3 days before flying to Egypt to represent Canada at Top Model of the World. I represented Canada, and did it my way. Here are the before and after pictures:

Top 5 Benefits of Shaving Your Head

Here are some of the benefits of being a shaved head woman:

#1: You Weed Out Superficial People

Fortunately we exist in a society where we as women can express ourselves by shaving our heads. However it’s still far from the norm, and often times people will let you know if they don’t agree with it. The reaction to my statement was very split. There are a handful of people who chose not be in my life anymore after it. However, the love overshadowed the absence and I was able to see who was in my life to support me and not just my image.

You have no choice but to be confident in your raw authentic self. Before, I was able to adapt and change myself to fit into whatever environment I was in (ex; abandoning my “artsy” style for pageant events and following fashion standards), however when your head is shaved you are forced to show up as you are, and love it!

#3: Your Features Stand Out

You really discover a new self love for your face when you shave your head. Suddenly there isn’t hair and the styling of it distracting from your facial features. Even if you don’t believe you have particularly striking features, believe me, they will be with a buzzcut!

#4: You Get Try Out All the Hairstyles Along the Way!

Before shaving my head I never had hair shorter than my collarbones. I was always far too afraid of what other people would think or regretting it. So I kept my hair long, despite always being curious about shorter hairstyles and bald head girls. Well, now that I’ve shaved my head and grown it out I’ve had so much fun experimenting with the extremely short Jean Seberg pixie cut, as well as the slightly longer Audrey Hepburn pixie cut I always wanted but what too afraid to try! I’ve now kept the latter haircut for over 6 months, and I’m eager to experiment with the bob after growing out the pixie.

We all have this rather prominent aspect of our consciousness called the “ego”. The ego is something I know very well I am ruled by, but I was ruled by the ego more so whilst I was wrapped up in the beauty pageant world. To be ruled by the ego is not always to suggest you have an inflated confidence, it can mean the opposite. The ego isn’t our true selves, but rather our image of self. Often times we grow obsessed with this false image, especially in a world very driven by ego, with the overflux of advertisements we absorb. Shaving my head assisted me in realizing the unimportance and impermanence of ego. Having long hair was just one aspect of my physical form I relied on to try and gain self-love. My hair was long during the entire life because I thought without it I wouldn’t be beautiful. However, as I literally stripped myself of that idea in the physical realm by cutting my hair something happen within myself as well. I was still me, despite losing a lot of what had been defined as me for so long.

Should You Shave Your Head?

I believe that if you’ve clicked on the article with a spark of a desire to shave your head, and made it this far through the article that it’s no coincidence. I’m not a believer in coincidences. I remember exactly where I was when the universe planted the seedling of an idea in my mind to shave my head to protest beauty standards. I thought I was crazy. But I knew the universe would not plant an idea in my head to harm me. Seeds are only planted to grow. I came out the other end blooming with self love. Take the time to reflect inward and ask if this is a soul desire of yours. And if you’re waiting for a sign, this is it.

Love yourself at where you are, trust that you are where you need to be, your journey and your process are beautiful. I am wishing all the readers luck and abundance on their path to self love and acceptance.