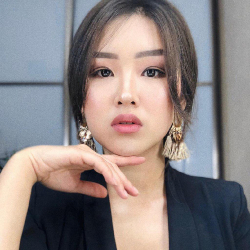 A ponytail is not trivial anymore. This hairdo is one of the simplest, yet most versatile styles, and there is a huge amount of ideas about it. The ponytail has been popular for decades already, and its famousness among women of different characters and ages confirms its practical and aesthetic value. Keep reading for creative ponytail hair ideas you can save for special events!

This hairstyle comprises two elements – a plait (braid) and a side braid, which look great together. Little knots make the hairstyle much interesting and don’t interfere with the whole image. You can use mousse if you want to make sure the ponytail doesn’t go anywhere. As a result, we get a hairstyle suitable for a self-confident and strong-willed girl.

How about adding some pearls to your style? This is not just a decorated ponytail; the idea is to lay emphasis on the regality of its owner. The pearls are placed like a crown, something that would make your appearance really majestic.

A simple ponytail is a nice object for experiments. If you want to change it up, you can use a needle in your hairstyle! The front tail gets intertwisted with the right and the left spikes, and then a needle is used to fix this with a thread.

You might think a bow is a well-known and banal hairstyle feature. Well, that may be true, but you can’t deny that it works quite harmoniously with a ponytail! A black bow adds some gentle femininity to your image and looks just fascinating with long hair. A great choice for festive events!

There’s a golden rule of making a jaw-dropping female appearance. If you add some element of weaving to a usual hairstyle, it will play out in fresh colors. Have you ever seen a halo around the sun? Why not try to compose your own natural halo, which would make your image even more delicate?

Dividing your ponytail into two parts and covering them with a masterful weaving may be a nice idea. This resembles a natural clasp fixing your hair. Charming weaving is held with mousse and creates a feeling of glamor and style.

You should try this ponytail if you want to look awesome and self-confident. The hair that spikes from all sides are put back and weaved into a strong ponytail. Two parts are reliably interlinked and make your finished look really eye-catching.

#8: Ponytail with a Strict Clasp

Speaking of creative hairstyles, they basically mean a variety of styling, which is created through unusual weavings, combs, decorative ornaments and unique texture. Let’s consider a ponytail with a clasp. It can emphasize your style and goes well with different images; besides, it reflects your decorum, accuracy and neatness.

#9: Graded Ponytail with a Butterfly Clasp

Long hair is the natural wealth of a woman. Being set to a ponytail, it may be graded for an even better look. Two principal knots make the hair wavy, and a butterfly-like clasp is an elegant feature, which creates a wow-effect.

When it comes to hairstyle, chains are not a symbol of captivity, but that of elegancy! This kind of ponytail requires a chain and three hair slides. Your hair should be slightly pre-curled and treated with a texturizing spray. The floppy chaos on your head turns into a fascinating hairstyle!

We do not know for sure which hairstyle Cleopatra preferred, but her royal status certainly required some gold in her hair. Three little golden rings and also affixing a weaving of the same tone beneath makes this type of ponytail gorgeous. Add some imperial note to your appearance!

This is another way of including weaving into your unique style. Two little knots form a magnificent bubble, adding a feeling of charm and femininity. For more effect, long spikes may be left free from both sides of your face.

This hairdo would be perfect for women who prefer a business style. Four straight lines are held with a natural ring and create a feeling of strength. If you’re going to a business meeting and want to make an impression, you should certainly try this ponytail!

Wedding is a prominent event, and this hairstyle would be a perfect option for it. Lillies-Of-The-Valley, or other flowers, may be used as accessories. They are placed at the base of the bride’s ponytail for decoration, adding tenderness and spring freshness to her image.

If you like ponytails, you may be fascinated with its high variant. Being ultra-feminine and stylish, a high ponytail shapes your figure and creates a pendulum effect of hair movement with every step you take. This hairstyle is a classic, which flashes again in the backstage of the most prestigious fashion shows.

White thread is a feature that cannot be ignored when it comes to creating an individual female style. When you make the ponytail and ensure it’s not crooked, it contributes to a confident and independent look. Both sides of white thread are marked with dark knots.

This hairstyle looks elegant and fashionable. Dark bands add some charm to a simple hairstyle and make it suitable for many looks.

If you don’t believe that it’s possible to create a masterpiece with two slides and silicon elastics, check out this hairdo. The braids are weaved and then they are put in a hairstyle that looks quite fashionable and a bit insolent. Nice choice for a woman who always knows what she wants!

#19: Triple Weaving with a Bow

A ponytail looks better with a weaved element. This hairstyle requires three principal braids, which are ended with a hair-tie below. The black bow is an essential part of the image and adds zest to this chic hairstyle.

Can any hairstyle be simple and fascinating at the same time? Yes, and it’s called Four Pearls. Discover the hidden charm of this ponytail decorated with creative pearl pins. It looks really fresh and elegant.

Let a ponytail be your best friend this season. Now you know 20 more ponytail hair ideas. Save them for later or simply follow Viola Pyak on Instagram to get daily inspiration and tutorials.