20 Benefits of Going Gray I’ve Experienced Throughout My Journey 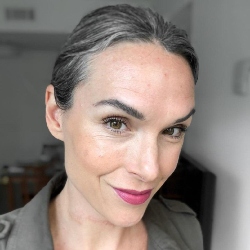 I never considered going gray. I mean, who in their right mind would intentionally sign up to look old? Not me. But then, something happened. My gray hair started coming in quicker, my hair appointments became more frequent, and one day I caught myself thinking, “What if I stopped dying my hair?” And then I did. The negative stigma around going gray is really loud. Today I want to mute that and turn up the volume on all the benefits that come along with going gray.

Anyone want an extra $21,000?! For argument’s sake, let’s say you dye your hair every 4 weeks and each appointment costs $60 total. Now let’s say you are also on track to dye your hair for the next 30 years. That’s how much cash you will save, sister. $21,000. Now go buy yourself a new car to celebrate.

Along this same argument, if you go to the salon every 4 weeks for a 2-hour appointment and continue to do this for the next 30 years, that equals 30 days. Stop dying your hair and you gain an entire month of your life back. And that doesn’t even include driving to and from the hair salon.

I am part of a Facebook group called The Gray Book with more than 6,000 women in it who are all going gray. There are a ton of before-and-after photos shared in this group and I can say with confidence that when women stop dying their hair dark and allow lighter gray shades to frame their face, it brightens their complexion 100%!

You know that feeling when you’re out and about, and everyone is looking at your roots? It’s like everyone is that guy from college who thought your boobs were your eyes, except sub roots for boobs. Well, you can say goodbye to that.

No matter what your skin color or tone is, the minute you introduce gray hair into your look, cool tones will complement. This means you can rock hot pinks, hot purples, cool blues and all the shades you thought you never could.

When you stop dying your hair, don’t be surprised if it gets stronger, shinier and softer, too!

When I was younger, I craved that multidimensional hair that was a million shades of blonde. I experimented with highlights in my 20s but with my dark dark hair, the hairdresser had to lift it so much that my highlights just broke off #truestory. But now, with gray hair, I finally have the dimension I’ve always wanted, and my hair looks amazing in buns, a pony and especially in braids. I’m obsessed.

You won’t believe this one until it happens but trust me. One of the biggest lies I was telling myself is that people hate gray hair. NOT TRUE! In fact, people actually love gray hair. They love it so much they can’t stop themselves from complimenting you. One guy even yelled it from his convertible as he drove past me on the street. Wow.

Maybe you think this is a little sensational. I thought it was too when I first said it but the truth is, it’s not sensational at all. Because I am going gray publicly and invite conversations about going gray on my blog and social channels, I’m privy to the impact my decision has had on other women. Women write to me saying things, such as:

“I never considered going gray until I saw you going gray.”

“I didn’t know going gray was an option until I saw you going gray.”

“I went gray because of you.”

Women may not say these things to you explicitly but know that you are leaving these gifts behind in your wake.

Let’s cut to the chase. Hair dye works because it employs some combination of health-compromising ingredients, such as PPD, PTD, resorcinol or aminophenols; this is true for “organic hair dye” as well. Even when a brand says they formulate “PPD free”, they are most likely using an alternative that is like PTD. Outside of Hairprint and henna, there has been no new hair dye technology invented in over 100 years. Period. Check out the EPA’s chem sheet on PPD to see all the hazards you can avoid. And that’s just from one ingredient!

You know that itchy-scalp feeling you have that lasts a couple days after each dye? You can say goodbye to that (as well as the dye under your fingernails from scratching so much too.).

Along those same lines, you can also say goodbye to that sexy black/brown halo along your hairline that lingers for days after each dye.

This one blew my mind. I always thought gray hair was ugly, but then I started growing out my hair gray, and I found myself actually loving it. Today, three years later, I can say it’s one of the best things I ever did. Gray hair has always been the same but what changed was the story I was telling myself about it. Today, I embrace a new story, a new truth.

When you start getting real about your gray hair, you may find yourself getting real in other aspects of your life, too. You may start evaluating how you’re living your life, who you’re allowing in your life, what your daily habits are and questioning all of it.

I never thought of “hating on my gray hair” as body shaming, but the truth is that IT IS. Through this process, I went from 100% hating a part of my body to 100% loving it, and that feels so good.

Many women report that, after going gray, they don’t need to wash their hair as often. I concur.

When I compare before and after photos of myself, I actually think I look younger now compared to 10 years ago. I mean, this is some straight up Benjamin Button action right here! (Me on the left on my wedding day and me 10 years later on the right).

Consider going gray and invitation to what I like to call “The Sisterhood.” This is the wink, smile or the “I love your hair” you will get and give to/from other women who are also going gray. These kind gestures acknowledge the strength, autonomy and beauty we see in ourselves, as well as others.

Prove to yourself that you can do something hard, and make every hard thing that will happen in the future a little bit easier. You can do this.

Be sure to check my website, This Organic Girl, and join thousands of women in my private Facebook group The Gray Book to gain inspiration, support, strength and solidarity. Support is the one thing I recommend for a successful growout! Lastly, follow me on Instagram @thisorganicgirl!