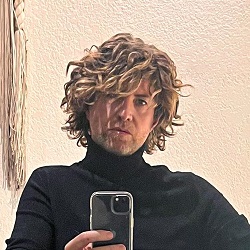 What makes a bob “French”? The French bob is typically a little shorter than a standard bob. It hugs and accentuates the cheek bones. It tends to be more on the blunt side and almost always has some form of bangs.

The bob haircut’s earliest known appearance dates back to the 1890’s. It was a French actress with the stage name Polaire who dared to wear the hairstyle for the first time. She was always a step ahead of the trends and took some pretty cruel criticism for it from the press.

At the time, the bob was looked at as not being very ladylike and could be considered rebellious as it went against gender roles. Since then, there have been many variations of the bob. What makes it “French” is simply embracing some of those early defining characteristics that were mentioned above.

So, here’s a look at 20 different French bobs to show you how the look has evolved but still features the same defining characteristics from its earliest days.

#1: The French Bob that Started It All

This is one of the earliest known incantations of the bob. French actress Polaire wore the hairstyle at a time when it was considered to go against what was typical for women in the late 19th century. It wasn’t considered ladylike to have shorter hair. Maybe that was part of her reason for feminizing the look with hair comb and the bow.

This is a GRAND SLAM from @brianaguilarhair. It just has it all and is so darling on her. As far as French bobs go, this one is hitting on all cylinders.

This masterful French bob by the incredibly talented @salsalhair is about as good as it gets. It has it all. The short length, the weight line, the bangs, the little pieces that hug and accentuate the cheekbones. Plus, it’s on the gorgeous @taylorlashae.

Here’s a lovely French bob from @brentdanielbasore with the free moving tousled natural texture look. It’s just a little longer but still utilizing all the features of the French bob. It’s amazing how this look can transport you right to the coffee shops of Paris.

Here we see @memmieyo playing with some fun colors but still maintaining the Frenchie-ness of the bob. The look is accentuated with curtain bangs and a heavy weight line around the perimeter. It’s styled with a smoother look rather than the natural textures we see in most French bobs.

#6: Long Bob with the French Touch

This bob from @brentdanielbasore doesn’t have the bangs and is quite a bit longer but still has the natural texture with the weight around the bottom. The bob was styled with natural texture but lightly finished with the iron.

This cute little bob from @brentdanielbasore has the cheek hugging pieces but has quite a bit more layering with the face framing bangs. It can be worn softly tucked behind the ear. It also is quite easy to manage with a little mousse and letting it air dry.

Here is a short cut from @brentdanielbasore that has the soft bangs and face framing pieces. The back is a little more layered than the French bob yet it still has a French vibe because of the natural texture. The style plays with some of the same features of the French bob without completely replicating the look. It still feels very French!

This is about as classic as it gets. It’s got the bangs with the heavy weight line. It also has a very natural feel with the styling. Looks so effortless and is brought to you courtesy of @ahappyjustin.

This freshly chopped bob is hugging the cheekbones nicely. If you don’t want to cut the length quite this short, you can leave it a little longer and just style the length towards the face for a shorter look. @taylorlashae killing us softly with this perfect version of the French look.

This bob by @fabulousfrank really does a great job of using some of the prominent aspects of the first French bob. It has the strong wedge shape with a really strong weight line. The stylist adds his personal touch with the shorter bangs.

Accessorizing your French bob can go a long way to compliment the look. In fact, if you look at the first known photograph of a French Bob, you’ll see that Polaire added the ribbon to give it a feminine touch. Here we see @madame.barber add a beret to complete her look.

Oh la la! This French bob on wavy hair by @nicolechelinikinghair is a real stunner. So much like some of the earliest versions of the French bob but with the light flicky pieces giving us life.

Playing with color can add a fun aspect to the famous haircut. So, when we see the iconic cut with a platinum blonde hair color from @crisdoeshair, it just goes together harmoniously. Loving the bangs and fun little pieces around the face.

Darling little French bob from @brentdanielbasore. This one is a complete throwback to the original. It ticks all the boxes and gives us the French vibe. However, the use of a trendy strawberry blonde color makes it have an alternative look.

Such an amazing before and after from the masterful @jayne_edosalon. Razor cut French bob with short fringe does marvelous job for the face shape.

Here is a French bob but without the weightiness usually seen. This is because the back is tapered and shaped to fit snug against the back of the head. This cute cut comes from – you guessed it – @brentdanielbasore.

This is a jaw dropping French bob with the cutest little curtain bangs and swoopy face framing. This work of art comes to is from @zaroslovs.

Love the choppy little bangs and soft wavy pieces that @saltybangs brings us with her playful vision of the French bob, which also hit the wolf cut trend.

Well, here you have it. 20 French bobs, each individual in their own way. Make sure to use the jawline or just above it when cutting the length. If you get a dry cut, you will still want cut it just a bit longer than your finished look. That way, when you wet and diffuse for the natural look, the length won’t be too short. Same consideration goes for wet cutting. The French bob is best styled by diffusing wet hair with a styling product of your choice. That way you can manipulate the natural texture in the direction you wish for the finished look.

Well, I hope to see you all and your beautiful work on the pages of Instagram. If you would like to see my hair artistry, you can find it at @brentdanielbasore.